SeaLink’s commitment to the Kangaroo Island community spans over 30 years and we are passionate about its future.

SeaLink strives to support the community wherever possible and given the remote location of Kangaroo Island, our support is primarily in the form of sponsored ferry travel. This assistance helps to ensure a quality of life that may not be possible in some cases.

In 2019 our SeaLink CommunityLink Program supported over 50 Kangaroo Island community and sports associations, charities and events, and donated over $200,000.00 in ferry travel.

CommunityLink is only available for Kangaroo Island based organisations. Submissions for 21-22 are now open until Sunday 21st February 2021. Please complete the CommunityLink application form to apply.

SeaLink receives many requests for travel, financial, prizes and gifts support, however, our priority is to support Kangaroo Island to assist with the development and growth of its community.

If you are seeking sponsorship which will support the Kangaroo Island community please complete our general support application form. Please read the SeaLink Sponsorship Conditions & General Information carefully before submitting your application.

The Foundation for National Parks & Wildlife is the charity partner of Australia’s National Parks. They are a non-government organisation with a mission to protect Australia’s ecosystems and native wildlife for generations to come.

FNPW funds projects that support the permanent preservation of Australia’s unique natural environment. Since its founding in 1970, FNPW has funded over 600 scientifically-based Australian conservation programs. Find out more. 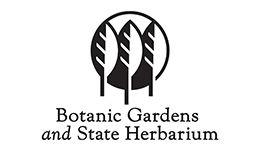 The South Australian Seed Conservation Centre, in the Adelaide Botanic Garden, helps to protect South Australia’s threatened plant species from extinction, while supporting the restoration of habitats around the State.

Following on from the devastating Kangaroo Island bushfires of 2019/20, SeaLink partnered with the Seed Centre to help fund a series of field trips by our specialist Seed Conservation Team to locate some of KI’s most unique and endangered plants, collect their seeds, and bank them at the Botanic Gardens in Adelaide. This is will help prevent extinction and ensure the ongoing survival of these threatened plant species. 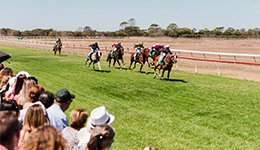 The SeaLink Kangaroo Island Racing Carnival is held in February each year over three days. The Carnival features two race meetings, a casual smaller affair on the Thursday and KI Cup Day on the Saturday with the feature race being the Dudley Wines Kangaroo Island Cup.

Hundreds of visitors from the mainland flock to the island, many making a long weekend or short break holiday out of their stay.

If you are interested in more information on our 2022 KI Cup Day Packages, please register your details here and we’ll send it to you when it is released.

Or you may want to consider taking a self-drive or touring or caravan holiday allowing you more time to explore the island.

The Marathon course is located in the spectacular Flinders Chase National Park and this year will take on a whole new set of sights for runners after the devastating bushfires in December 2019. Runners will be inspired by deviating and undulating trails, an exposed coastal section with views of the powerful Southern Ocean, a loop that travels by historic landmarks such as Cape de Couedic Lighthouse and Admirals Arch, and a zig-zag boardwalk leading to the iconic Remarkable Rocks.

Now in it's sixth year, this event is set to be a special one for participants. Sign up for the full marathon, half marathon or 10k event to be part of this iconic race in one of the top marathon locations in the world! 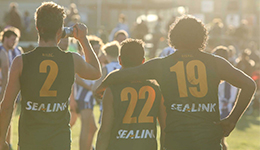 KIFL is an affiliated member of the SANFL. There are 5 teams (Kingscote – Hounds, Dudley United - Eagles, Parndana - Roosters, Western Districts – Saints and Wisanger – Panthers and each week during the season they host A Grade, Reserves and Colts grade teams. Given the small population of Kangaroo Island, it is difficult to field full teams and SeaLink’s ferry travel sponsorship assists volunteer players to travel from the mainland to play. SeaLink’s sponsorship also enables team players to travel to compete in SA country football carnivals and to attend development opportunities. SeaLink also co-sponsors the ‘Club of the Year’ Award with the SAFC.

SeaLink is proud to be a sponsor of the Kangaroo Island Netball Association. Our sponsorship enables past and volunteer players to travel to Kangaroo Island to play in matches and importantly allows for Kangaroo Island based players and umpires to travel to the mainland for academy visits, country carnivals and player development opportunities.  SeaLink also sponsors the ‘SeaLink Star Volunteer Award’ each year where volunteers from each club are nominated.

KICE was formed in 2005 as a multi-campus school from the three KI Area Schools – Penneshaw, Parndana and Kingscote. KICE has approximately 700 students located across the island. SeaLink’s sponsorship assists students who can be disadvantaged by the issues associated with living in a remote and isolated community. With the assistance of ferry travel, SeaLink supports hundreds of students every year to take up various opportunities on the mainland including sporting carnivals, performing arts, music cultural excursions and Careers Week. SeaLink also plays an integral role in mentoring and influencing the development of young people through the Virtual Enterprise program.

KI Dolphin watch is a research program monitoring wild dolphin populations around our coastline. The program involves Kangaroo Island school students and community members collecting data about local dolphin populations, their behaviours and their habitatThe organisation uses non invasive photographic techniques to identify dolphins and their group structures with the ultimate aim of protection and conservation. Find out more.

Rebuild Independence Group (RIG) is a community-based, non-profit organisation founded in 2013 with the mission of rebuilding the Schooner Independence, the first vessel built in South Australia. They have successfully raised enough money to build a boathouse at American River on Kangaroo Island. They now need to raise $20,000 to produce detailed boat plans that will comply with the strictest "survey" standards and will enable Independence to carry fare-paying passengers when finished.

The Kangaroo Island Country Education Fund was established to provide financial assistance and support to local youth to help them achieve their post high school education, training and vocation aspirations. It is recognised that the cost of rural students pursuing their post high school goals is often much greater than students in metropolitan areas and that sometimes these costs can be prohibitive. KICEF raises funds annually in order to provide financial grants to students who need an extra helping hand

The Royal Flying Doctor Service of Australia (RFDS) is one of the largest and most comprehensive aeromedical organisations in the world. Using the latest in aviation, medical and communications technology, we deliver extensive primary health care and 24-hour emergency service to those who live, work and travel throughout Australia.

SeaLink are proud to support GSFLW Round 2 with a visit to Kangaroo Island for the “SeaLink Kangaroo Island Challenge Cup” on Saturday 20 March 2021 with Yankalilla FC vs Goolwa/Port Elliot FC at the Dudley United Football Oval in Penneshaw from 12.00pm. Come and try sessions on the day. Find out more.

The partnership between SeaLink Kangaroo Island and the South Adelaide FC will promote the community involvement that both organisations play in assisting the young people of Adelaide's southern suburbs, Fleurieu Peninsula and Kangaroo Island in particular to meet their full potential. Find out more.

You have logged in as a KI Resident
Only bonafide KI Residents registered on your login are eligible to utilise your Internet login and password. Bookings made for non-residents using your KI Resident Internet login will result in online privileges being removed. For further information including specials, go to our conditions and specials for KI Residents page

By clicking 'I Agree', you are agreeing to SeaLink's Terms and Conditions for KI Resident Internet bookings.

New!You can now change the time and date on your ferry/coach/shuttle bookings by visiting the Manage My Bookings Page

By clicking 'I Agree', you are agreeing to SeaLink's Terms and Conditions for Premier Club Internet bookings.

I Agree I Disagree